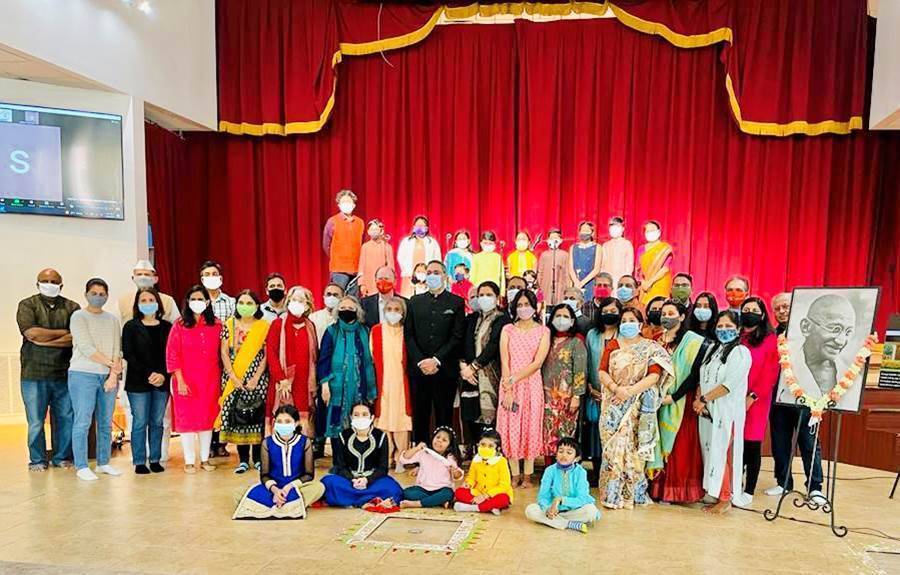 Mahatma Gandhi said “I shall conquer untruth by truth. And in resisting untruth, I shall put up with all suffering.” He was never afraid of death.

Currently, the world is encountering several challenges including intolerance, impatience, and terrorism. It is essential to follow the ideas and principles of Mahatma Gandhi, especially truth and non-violence, not only to achieve international peace and prosperity, but achieve the same within one’s own heart.

Eternal Gandhi Museum Houston is a non-profit organization whose mission is to promote the universal values of truth, nonviolence, love and service.

The Shraddhanjali program started at 3:00 pm with a gracious welcome by Sanjay Jain, President of Arya Samaj Greater Houston and also a member of Board of Trustees of EGMH. Dr. Rakesh Agarwal was a brilliant Masters of Ceremony for the program, which initiated with an Invocation from Rev Mindy Curtis, former Associate Minister at Unity Houston, Acharya Dr. Suryanarayan Nanda of Arya Samaj of Greater Houston and Zainab Khuwaja-Khawaja-Ali representing Shia Imami Ismaili Muslim Community.

As a symbol of purity, truth, knowledge and understanding, the symbolic Diva was lit by distinguished guests in attendance including Consul General of India Aseem Mahajan, Sita Kapadia and Atul Kothari.

The program started with a beautiful rendition of the bhajan Prabhu Ji Hamey Prem Sagar Se Bhar Do (O’ God fill us with unfathomable love) by Smriti Shrivastava, director of Swar Sangam School of Music and the precious children of the DAV Montessori School and DAV Sanskriti School of Arya Samaj Greater Houston.

Next, on behalf of Congressman Al Green’s office, Mr. Sam Merchant presented a Certificate of Recognition to the Trustees of EGMH.

Fifth grader Ayushi Kawedia from Austin Parkway Elementary School, was the 2nd place winner of the annual Mahatma Gandhi Week speech contest. She delighted the audience with her winning speech, “My thoughts on Global Warming.”

The talented Kamal Haji, Director of the Zikr Band, presented a beautiful rendition of “Allah” and “Lab Pe Aati Hai Dua” (I sing this prayer from my heart) and “Allah Tu Hazir” (God you are present) bringing tears of joy in the eyes of many in the audience.

Dr. Manish Wani, Co-Founder and a member of Board of Trustees of EGMH, gave an informative update of the museum with a brief video glimpse of the ongoing construction and interior design of the museum.

The program concluded with a vote of thanks by Co-Founder and a member of Board of Trustees of EGMH, Mr. Atul Kothari.

Swar Sangam School of Music, directed by Smriti Srivastava, then sang Vaishnav Jana to and Raghu Pati Raghav Rajaram while everyone in the audience came up to the garlanded picture of Mahatma Gandhi to pay their respect.

A short reception followed with tea and snacks.

We do sincerely apologize that due to technical difficulties, we were unable to show the program virtually on YouTube Live. The video of the program will be made available on our EGMH YouTube page soon.

For a virtual tour of the museum please visit https://egmh.org/virtual-tour/