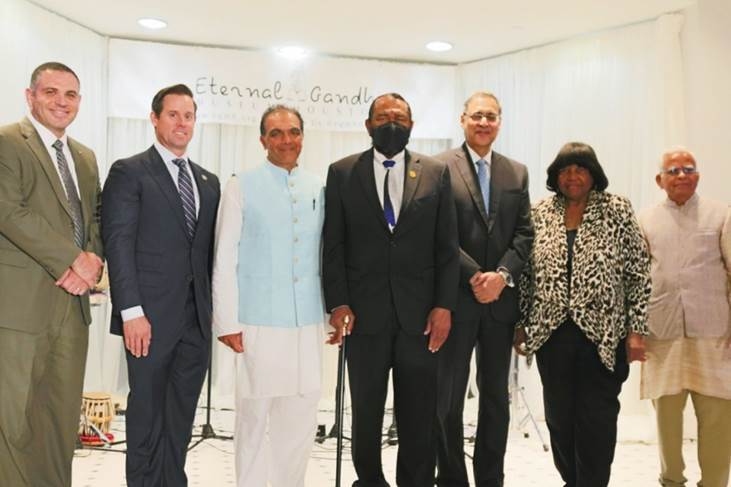 Houston will soon be home to Eternal Gandhi Museum Houston, EGMH, the first ever museum in North America, dedicated to Mahatma Gandhi. The museum’s goal is to preserve and proliferate the greatest and most incredible legacy of Mahatma Gandhi, “Nonviolent Conflict Resolution.” Please visit www.egmh.org to learn more about this exciting new initiative.

EGMH took another concrete step on its journey to bring to life the EGMH with a dinner reception honoring Congressman Al Green for sponsoring $3 million grant for the museum through the Community Project Funding under the Department of Housing and Urban Development. The auspicious event occurred on Saturday, July 16, 2022, at India House on 8888 W. Bellfort, Houston.

The evening began with a warm reception. The attendees had the opportunity to view the Gandhi Darshan Exhibit, glimpses of pictures depicting significant facets of Gandhi’s personality with a unique reference from his childhood, his studies in England, his activities in South Africa, and the triumph of Indian Independence. During the reception, we unveiled a brand new 3D model of the Eternal Gandhi Museum, showcasing the structure and flow of the actual museum. 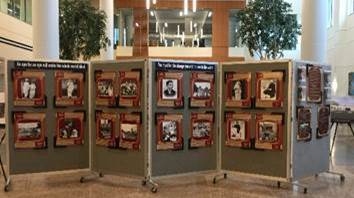 The program began with a recitation of the Universal Prayer by Emcee Dr. Manish K. Wani, trustee and co-founder of EGMH. After welcoming all in attendance, Dr. Wani explained Eternal Gandhi Museum’s journey from Delhi to Houston, which commenced more than six years ago and is now less than a year away from opening its doors to the City of Houston. Dr. Wani highlighted that EGMH would specifically focus on the principles of Peace, Truth, and Nonviolence while based on the life and teachings of Mahatma Gandhi. The audience was then treated to a melodious rendition of “Ram Ka Gun Gaan” and “Vaishnava Janato” by the talented Smriti Srivastava and students from her Swar Sangam School of Music.

The Guest of Honor for the evening was the Consul General of India, Mr. Aseem Mahajan. The Consul General pointed out that the construction of the Eternal Gandhi Museum Houston coincides with “Azadi ka Amrit Mahotsav,” the period during which India is celebrating its 75 years of Independence. He said Mahatma Gandhi, throughout his life, remained committed to his beliefs in nonviolence, even under oppressive conditions. In the face of seemingly insurmountable challenges, Mahatma Gandhi’s philosophy, teachings, and thoughts are of great relevance in the world today, Mahajan added. “Because this is truly one of its kind initiatives where they will connect locally with many schools, institutions and also showcase the life and message of Mahatma Gandhi,” Mahajan said. From this effort, deep ties would form nationally and globally, strengthening bonds between the City of Houston, the United States, and India.

The Keynote Speaker for the evening, Dr. Clayborne Carson, was a Stanford University professor who primarily taught U.S. History and African American history for over four decades. After his so-called retirement, he founded the World House Project, where he has drawn attention to the Black American-Gandhian relationship through podcasts, website exhibits, and audio-visual lectures. Dr. Carson participated in the historic Freedom March in Washington D.C. in 1963 and met Dr. Martin Luther King, Jr. and John Lewis. Gandhi and King had a complex relationship, even with their goals and passion were aligned, explained Dr. Clayborne. He was hand selected by Coretta Scott King to serve as the editor of The Papers of Martin Luther King, Jr. He received the Jamnalal Bajaj Foundation’s International Award for promoting Gandhian values outside of India. He truly delighted the audience with his experiences and stories.

Next to present was Solid Light, EGMH’s museum design and build firm from Louisville, Kentucky. Cynthia Torp, Owner, CEO, and Chris Mozier, COO and Project Manager, updated the audience regarding the design, fabrication, and installation of the planned exhibits for the museum’s interior. With a superb slideshow and video presentation, they explained that the museum consists of three essential areas: 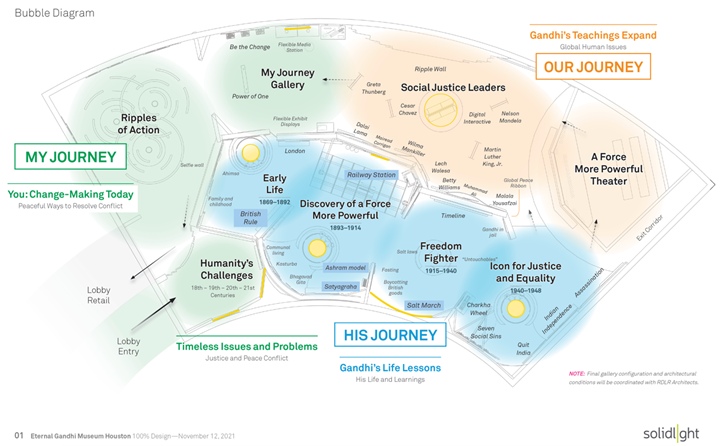 Principal Architect Lori Westrick from the firm RDLR Architects gave a brilliant presentation on her involvement with project and her inspiring journey to India in February 2020. With EGMH Trustees Atul Kothari, Manish Wani, and Ajit Paralkar, she traveled to five different Gandhi National Museums in four cities over seven days. She explained that the EGMH building was circular, signifying infinity, the amount of effort required to sustain the concept of peace and nonviolence. 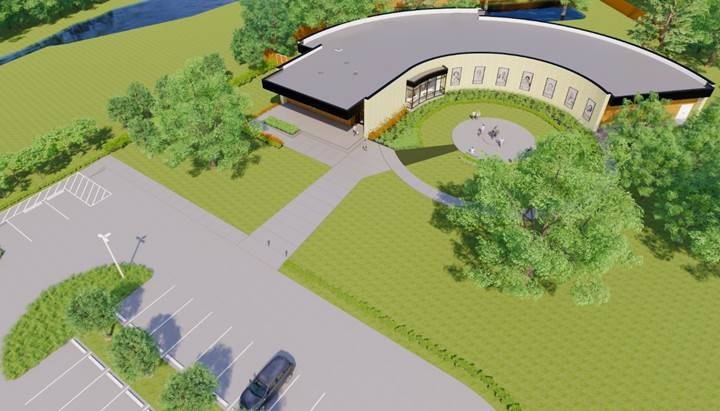 The Vice President of TDK construction, Tina Khatri, updated the audience on the museum’s construction. TDK has worked tirelessly since the groundbreaking in July 2021 and has overcome many supply chain challenges but is still on track to finish the exterior construction by the winter of 2022.

Dr. Manish K. Wani then gave an overall update on EGMH. He explained that the museum’s message is transformative: Through the practice of nonviolent conflict resolution, visitors (especially youth) can be catalysts for change in their own lives and communities. He defined the museum’s Vision: A world where conflicts are resolved by nonviolent means; and the Mission: To cultivate universal values of truth, nonviolence, love, peace, and service through education and community dialogue and to encourage visitors to embrace these values in their own lives. The museum project headlined the front page of the River Oaks magazine. Last week, the Better Business Bureau of Greater Houston and South Texas determined that EGMH meets the “Standards for Charitable Accountability.”

He explained that the project budget is $13 million, which includes a $3 million endowment fund. To date, we have raised $6.7 million, consisting of the $3 million grant secured by Congressman Al Green, $1.1 million raised from the Board of Trustees, $750,000 from Houston Endowment, $100,000 from the Elkins Foundation, and to date, $1 million from generous donors. Dr. Wani encouraged the audience to participate in this worthy and critical effort with “Tan, Man, and Dhan,” translated as Body, Mind, and Wealth. The museum will offer volunteer opportunities and will depend on the entire community’s participation. In conclusion, “No one knows where the next Gandhi will come from because the power for positive change lives in each of us. We don’t have to adopt his lifestyle to follow in his footsteps. His legacy calls us to do our own part through actions large and small to make a more just, peaceful, and sustainable world.” 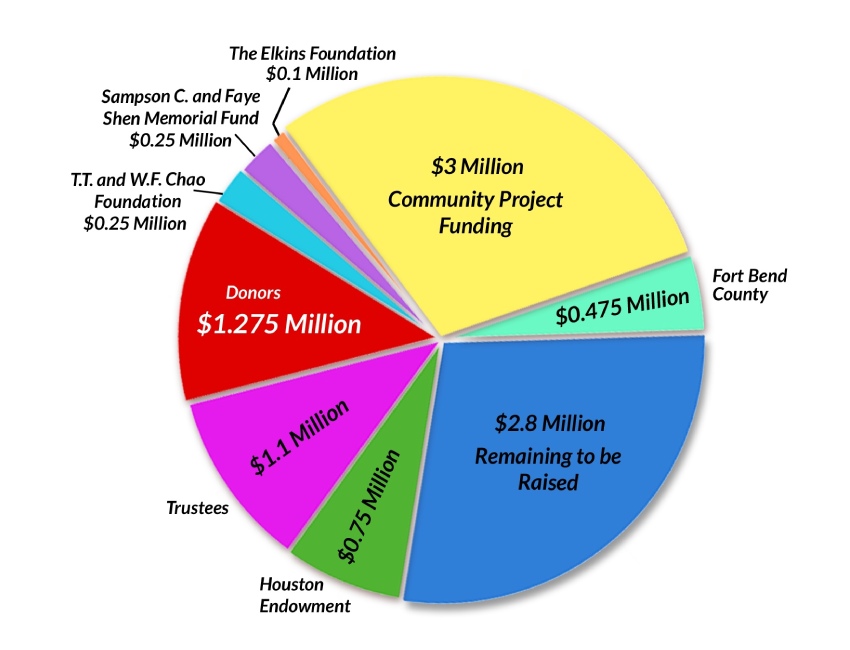 Mr. G.V. Krishnan, who recently retired, was introduced as the Interim Museum Director. He is very excited and enthusiastic about his new role and feels there would be no better way to give back to the community that has given him so much. He encouraged the audience to visit the EGMH website and get involved in any possible way.

The United States Congressman Al Green was the Chief Guest for the evening. The Congressman highlighted Gandhi’s nonviolent approach by citing a quote from Martin Luther King, Jr.: “Gandhi’s nonviolent approach was the only morally and practically sound method open to oppressed people in their struggle for freedom.” He emphasized how the only way to save the planet would be the absence of war! He was very grateful for the evening in his honor, and confident Eternal Gandhi Museum Houston would be a must-see attraction for all that visit the City of Houston.

Dr. Alma Allen, a member of the Texas House of Representatives for District 131 in Harris County, Texas, came to the podium to convey her best wishes and presented EGMH with a certificate of recognition.

Atul Kothari, the founding Trustee of EGMH and the leading spirit behind the project, extended a vote of thanks to all the advisory board members, volunteers, organizations, foundations, and public officials for their support. He recognized Congressman Al Green, Consul General Aseem Mahajan, and Dr. Clayborne Carson for their generosity and support. He related the story of how the Congressional grant was obtained and thanked the Almighty for the everlasting guidance.

The program concluded with Gandhiji’s favorite bhajan, “Raghu Pati Raghava Raja Ram,” sung by Smriti Srivastava of Swar Sangam School of Music. The dinner for the evening was catered by Mahesh and Alpa Shah of Dawat caterers.