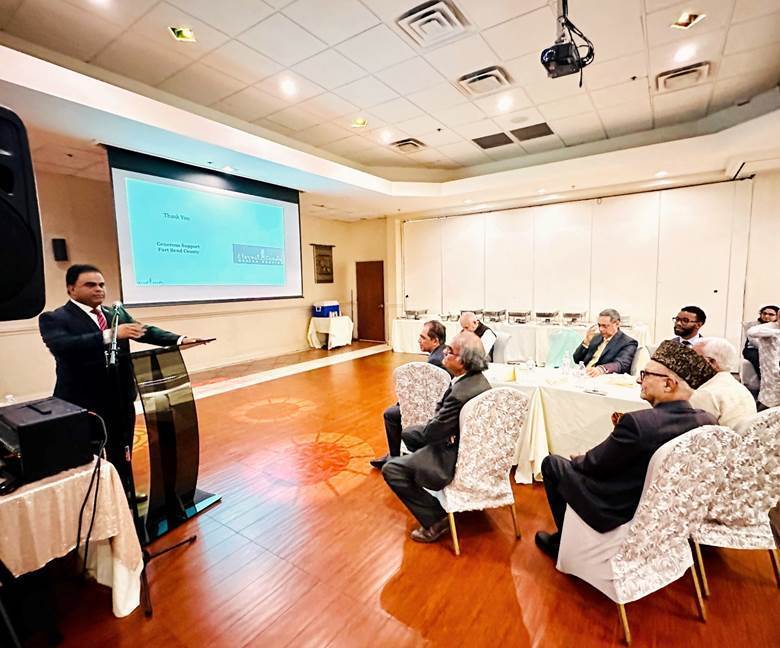 Opening in the Fall 2023 Eternal Gandhi Museum Houston, EGMH, will be the first ever full fledged museum in North America, dedicated to Mahatma Gandhi. The museum’s goal is to preserve and proliferate the greatest and most incredible legacy of Mahatma Gandhi, “Nonviolent Conflict Resolution.” Please visit www.egmh.org to learn more about this exciting new initiative.

The evening began with a warm reception. The attendees had the opportunity to view the 3D model of the Eternal Gandhi Museum Houston, showcasing the structure and flow of the actual museum.

The program began with a recitation of the Universal Prayer, We pray to the God of Sat (Truth) to give us the boon of Ahimsa (Nonviolence) in mind, word and deed, by Emcee Mr. GV Krishnan, Interim Museum Director of EGMH. After welcoming all in attendance, GV highlighted that EGMH would specifically focus on the principles of Peace, Truth, and Nonviolence while based on the life and teachings of Mahatma Gandhi. He also highlighted that this day was also the actual birthday of Dr. Martin Luther King Jr, America’s pre-eminent advocate for nonviolence and one of the greatest nonviolent leaders in world history. In honor of MLK, the audience got treated to a short segment of a video presentation from the amazing documentary “A Force More Powerful”. This is a PBS documentary on one of the 20th century’s most important and least-known stories: how the power of nonviolence overcame oppression and authoritarian rule. The segment viewed was about the civil rights movement lead by Dr. Martin Luther King, Jr.

Dr. Manish K. Wani then gave an overall update on EGMH. He explained that the museum’s message is transformative: Through the practice of nonviolent conflict resolution, visitors (especially youth) can be catalysts for change in their own lives and communities. He defined the museum’s Vision: A world where conflicts are resolved by nonviolent means; and the Mission: To cultivate universal values of truth, nonviolence, love, peace, and service through education and community dialogue and to encourage visitors to embrace these values in their own lives. The museum project headlined the front page of the River Oaks magazine. The Better Business Bureau of Greater Houston and South Texas determined that EGMH meets the “Standards for Charitable Accountability.” He explained the construction of the museum is near complete and the installments of all the exhibit has started and would take up to six months.

He explained that the project budget is $13 million, which includes a $3 million endowment fund. To date, EGMH has raised $7.275 million through various grants, fundraisers and personal donations. Dr. Wani encouraged the audience to participate in this worthy and critical effort. The museum will offer volunteer opportunities and will depend on the entire community’s participation. In conclusion, “No one knows where the next Gandhi will come from because the power for positive change lives in each of us. We don’t have to adopt his lifestyle to follow in his footsteps. His legacy calls us to do our own part through actions large and small to make a more just, peaceful and harmonious world.

Mr. G.V. Krishnan, who recently retired, has been appointed as the Interim Museum Director. He is very excited and enthusiastic about his new role and feels there would be no better way to give back to the community that has given him so much. He encouraged the audience to visit the EGMH website and get involved in any possible way.

Consul General of India, Mr. Aseem Mahajan then addressed the audience. The Consul General pointed out that the construction of the Eternal Gandhi Museum Houston coincides with “Azadi ka Amrit Mahotsav,” the period during which India is celebrating its 75 years of Independence. He said Mahatma Gandhi, throughout his life, remained committed to his beliefs in nonviolence, even under oppressive conditions. In the face of seemingly insurmountable challenges, Mahatma Gandhi’s philosophy, teachings, and thoughts are of great relevance in the world today, Mahajan added. “Because this is truly one of its kind initiatives where they will connect locally with many schools, institutions and also showcase the life and message of Mahatma Gandhi,” Mahajan said. From this effort, deep ties would form nationally and globally, strengthening bonds between the City of Houston, the United States, and India.

The Guest of Honor for the evening, Fort Bend County Judge K.P. George was then introduced. He addressed the audience with passion and humility. He was very thankful to be re-elected for a 2nd term and very excited for the growth and opportunities that lay ahead for Fort Bend County. He pointed out that Fort Bend County in 2022 was noted to be the most ethnically diverse county in the United States. He was very appreciative of the efforts and strides made by EGMH and looking forward to the opening of the museum.

The next speaker was newly elected Commissioner Dexter L. McCoy, a proud product of Fort Bend County, serving Precinct 4 residents on Commissioners Court. Mr. McCoy explained that he learned about Gandhi for the first time in the 1st grade from his grandmother who was an educator. He has been a fan ever since. Commissioner McCoy began his public service career as an appointee in the Obama Administration, where he focused on college access issues and implementing the administration’s agenda to address harassment in our nation’s schools. He has been following the growth of EGMH since he first attended the groundbreaking ceremony in July 2021 and is delighted about the opportunity the museum will provide to students to learn about non-violent conflict resolution. He made a personal donation of $1000 at the event to go towards EGMH.

Atul Kothari, the founding Trustee of EGMH and the leading spirit behind the project, then addressed the audience and started by thanking the Almighty for everlasting guidance. He extended a vote of thanks to all the advisory board members, volunteers, organizations, foundations, and public officials for their support. He recognized Fort Bend County Judge K.P. George, Consul General Aseem Mahajan, and Commissioner Dexter McCoy for their generosity and support.

The program concluded with a sumptuous dinner.