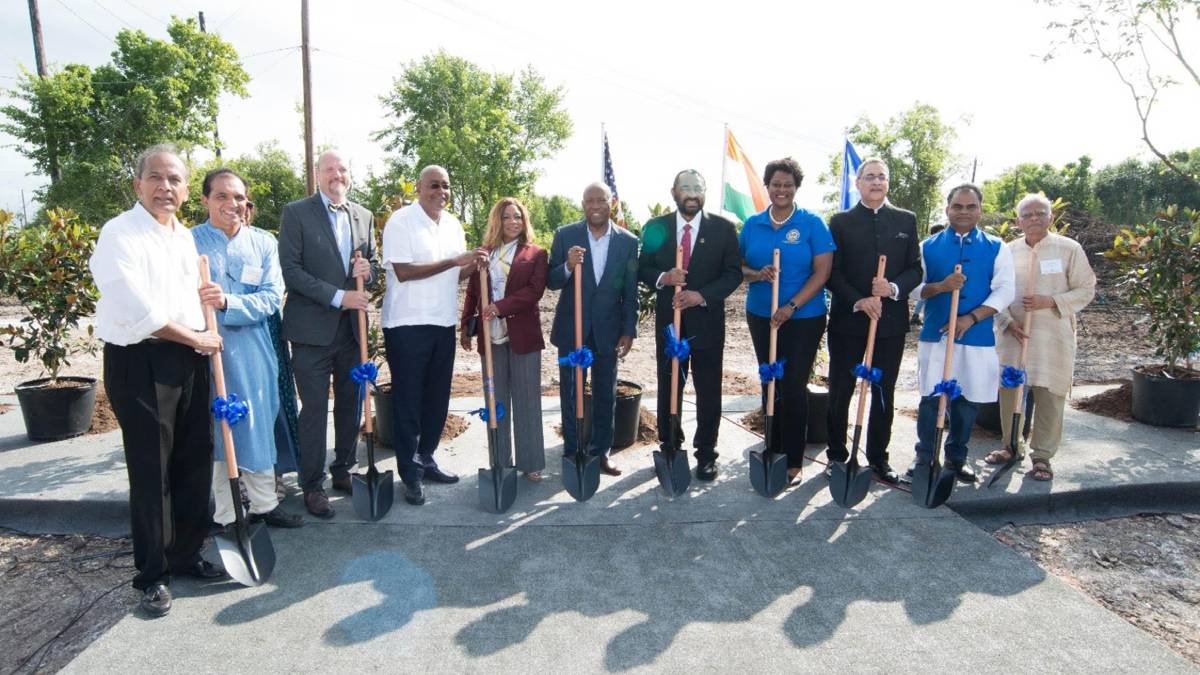 It was Saturday the 3rd of July, a seemingly normal day except for the palpable excitement in the humid air as volunteers and distinguished people alike eagerly gathered for the groundbreaking ceremony of the Eternal Gandhi Museum Houston (EGMH). This is a truly an exciting opportunity to bring a world-class, high-tech museum dedicated to promoting a culture of harmonious unity, understanding, and nonviolent conflict resolution- all ideals very dear to Mahatma Gandhi- to our diverse city of Houston, Texas.

The first museum dedicated to Mahatma Gandhi in the Americas, Eternal Gandhi Museum Houston, took a concrete step in its journey with a groundbreaking ceremony on July 3, 2021. The museum is located at 12379 Riceville School Road @ Beltway 8 S, Houston, TX 77071 and is expected to open in 2022.

In his remarks, Congressman Green highlighted Gandhi’s non-violent approach and cited a quote from Martin Luther King’s papers at the Stanford University’s King Institute: “Gandhi’s non-violent approach was the only morally, and practically sound method open to oppressed people in their struggle for freedom. The struggle for freedom never ends. The freedom struggle doesn’t end with one protest. It is a struggle that we all have to assume at birth, we are born into the struggle for freedom, not just for ourselves but for every living being on the planet earth. Gandhi lived up to these words that we should take them to heart today”. Green quoted a poet “Some measure their lives by days and years, others by heartthrobs, passions, and tears, but the surest measure under God’s sun is what we do for others in our lifetime.”

Consul General of India informed the audience that the construction of Eternal Gandhi Museum Houston will take place during “Amrit Mahotsav”, the period during which India will be celebrating 75 years of Independence. Mahatma Gandhi throughout his life remained committed to his beliefs in non-violence, even under oppressive conditions, he said. He also added that in the face of seemingly insurmountable challenges Mahatma Gandhi’s philosophy, teachings, and thoughts are of great relevance in the world today. Furthermore, he said “The power of peaceful means to seek justice, the effectiveness of non-violence in countering force, respect for diversity within and between societies, fighting social prejudices and promoting social reforms, conservation of nature and probity in public, are enduring ideas that can help us all to address many of the problems of the contemporary world”. The deep ties between the city of Houston and India and also between United States and India and globally would strengthen “Because this is truly one of its kind initiative where they will connect locally with many schools, institutions and also showcase the life and message of Mahatma Gandhi”.

Mayor Turner in his address to the audience stated “Houston is one of the most diverse cities in the United States and it welcomes the addition of the Eternal Gandhi Museum Houston to its rich cultural landscape. We pride ourselves constantly by talking about our diversity and inclusiveness. But, what’s happening here today, really amplifies the message by telling the story of Gandhi and the leaders, he inspired. The Eternal Gandhi Museum, activates a collection of educational initiatives that encourage children, youth and adults to choose the path of peaceful conflict resolution. And if there was ever a time for that to take place, that time is right now, this museum is a step in the right direction.”

Fort Bend County Judge KP George said, “With a lot of dignity and pride, I endorse the Eternal Gandhi Museum. We all know that we are living in a very polarized, political world, and it needs to be taught that without touching a gun or without touching a knife, or without physically fighting, Gandhi shook the British Empire at that time and that was so powerful. And his teachings are inspiring people all over the world. And I’m so proud to learn about Mahatma Gandhi at a very young age and learning and understanding, and I will be part of this discussion. He further added that Fort Bend County will look into the possibility of financially supporting this effort, because these teachings need to be taught.” 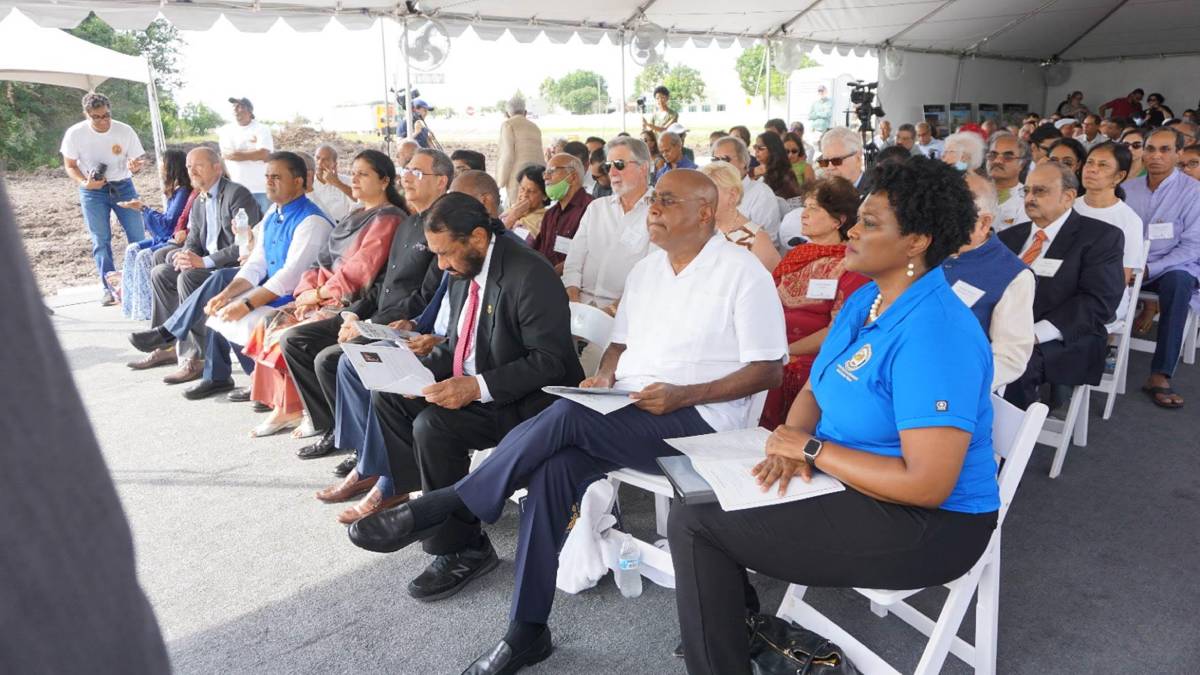 The ceremony began at 9 AM sharp with welcome by Emcee Dr. Manish K Wani, a trustee and co-founder of EGMH. He said the concept of bringing Eternal Gandhi Museum from Delhi to Houston started more than 6 years ago. The EGMH will specifically focus on peace, truth and non-violence and will be based on the life and teachings of Mahatma Gandhi. “Today, we stand on the grounds of a future 12,800 square foot facility, planned by the prominent architectural firm from Houston, RDLR Architects, as a cost-effective structure which will be elegant in its simplicity, like Gandhi himself. EGMH has teamed up with the design and fabrication firm Solid Light from Kentucky. They have craftily designed the interior with innovative multi-media exhibits and are truly creating the heart and soul of this distinguished museum”. Dr. Wani said.

The construction contract has been awarded to TDK Construction, which specializes in commercial construction since 1993 and has completed more than 400 projects in and around the Houston Area. EGMH has been guided by Smithsonian trained Museum Consultant Brian Crockett and education consultant Honor Moorman.

The Museum’s message is a transformative one: Through practice of nonviolent conflict resolution, visitors (especially youth) can be catalysts for change in their own lives and communities. It is a simple, unique idea – build a cultural hub in our own backyard to further peace in our community. EGMH will impact the community in so many positive ways. Its primary focus will be on Nonviolent Conflict Resolution. “Our vision is to see that every school-aged student visits EGMH at least once, before graduating, so they can be exposed to our mission of reinforcing the universal values of Peace, Truth, Non-violence, love and Service,” Dr. Wani said.

The project Budget is $12.5 million dollars which includes a $3 million endowment fund. To date, $3.1 million, has been raised.

The ceremony also featured the burial of a time capsule. Prem Cholia and EGMH board member Sesh Bala put together the time capsule to bury a historic cache of goods and information that depicts the current state of the world, with emphasis on the local situation and EGMH beginnings. The plan would be to remove the capsule in maybe 50 years as a means of communication with the future generation.

Then came the main event of the ceremony, the symbolic tree planting in place of traditional groundbreaking by dignitaries mentioned earlier and the Board of Trustees, Sesh Bala, Dr. Barkat Charania, Sanjay Jain, Atul B Kothari, Devinder Mahajan, Ajit Paralkar, Namita Sutaria and Dr. Manish K Wani. They were followed by the generous donors who have pledged $ 50,000 and plus for the project, Aditya Birla Group representative Nitin and Charulata Mathuria, Dinesh & Vibha Agrawal, Anand and Sudha Bhagavatula, GV and Bhuvaneswari Krishnan, Noorali and Noorie Hussain, Atul & Rita Kothari, Devinder and Sushma Mahajan, Narinder and Aruna Mahajan, Aman and Seema Oberoi, Amit and Shivani Patel and Dr. Kanti and Meena Wani.

Atul Kothari, the founding Trustee of EGMH, and the main spirit behind the project, extended a vote of thanks to all the volunteers, organizations, foundations and public officials for their support. He recognized the critical and sustained support provided by Co-Founders, Devinder Mahajan and Dr. Manish K Wani, and the tireless volunteers of Arya Samaj of Greater Houston since launching of the non-profit in 2002. The autobiography of Mahatma Gandhi, The Story of My Experiments with Truth, had a profound impact on Kothari. He discovered the essence of life is to practice one’s own truth nonviolently. It was his “aha moment.” Gandhi notably said, “Be the change you wish to see.” Kothari contemplated what he could do to spread this simple idea of practicing your truth nonviolently.
He and a dedicated cadre of like‐minded individuals formed the Mahatma Gandhi Library (renamed the Eternal Gandhi Museum Houston in 2019) to honor Mahatma Gandhi, study his teachings, and give back to the community through activities and events that shared teachings of nonviolent conflict resolution.

During the ceremony, Abeezar Tyebji and his mother announced a donation of $50,000 on behalf of the Dawoodi Bohra community in Houston.

The program concluded with Gandhiji’s favorite bhajan Vaishnava Jana To sung by the melodious voice of Smriti Srivastava of Swar Sangam School of Music.

Afterwards, all were treated to delicious snacks and Masala Chai from Indian Summer, a division of Dawat Catering company.

Bhoomi Poojan, the Groundbreaking ceremony, of Eternal Gandhi Museum was a grand success thanks to cooperation from mother nature and the everlasting support and enthusiasm of all who attended. 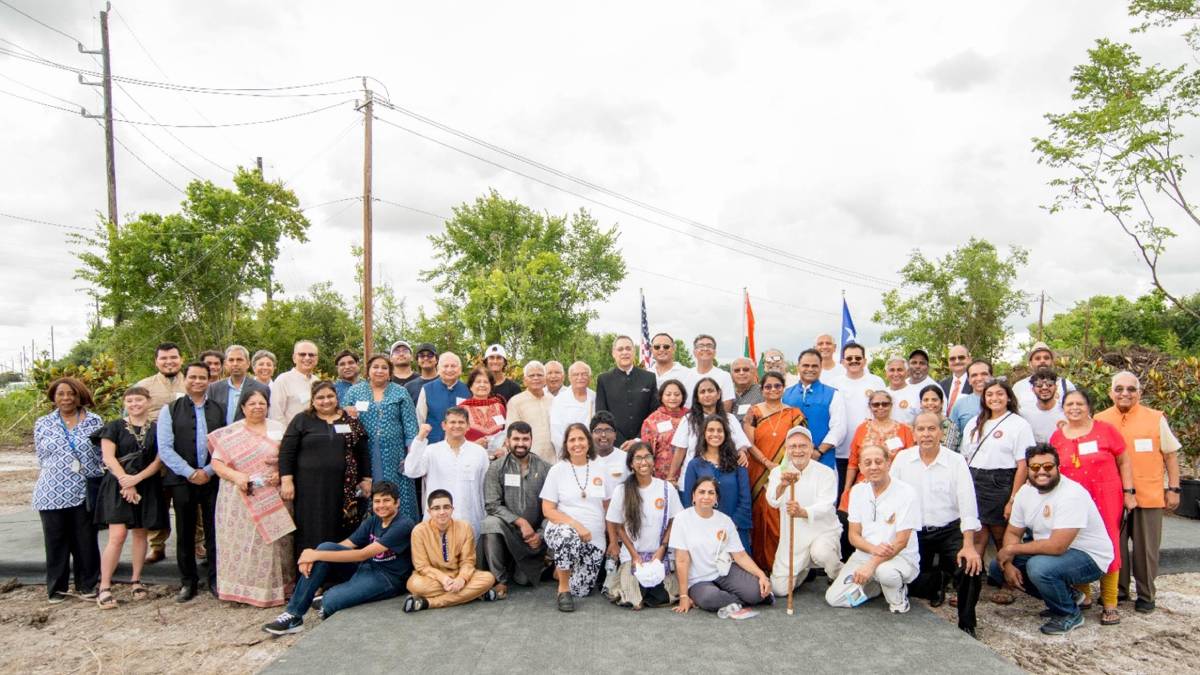