The Father of Our Nation, Mahatma Gandhi Ji, is majorly known for his efforts to free India from tyrannical rule in the 1940’s. What many do not know, is the lasting impact he has left on the minds of younger generations today, as seen in the amazing speeches presented by children of various ages. On October 6, Mahatma Gandhi Library held its 2018 Speech Contest for the 15th year at the gracious Arya Samaj of Greater Houston. The Speech Contest is held annually to determine the two speakers at the 1000 Lights For Peace program, at the Miller Outdoor Theatre. Under the able and proficient guidance of Dr. Rakesh Agarwal and Mr. Karam Gupta, the coordinators for this year, the speech contest ran smoothly and showcased the public speaking talents of today’s youth.

The esteemed three judges were Mr. Rashid Kapadia, Dr. Huma Jafry, and Colonel Raj Bhalla, all expressing keen interest in the words of the participants. The timer for the event was Dr. Alka Agarwal. Children 10 and under described their interpretations of the famous Benjamin Franklin quote “Honesty is the Best Policy,” while those 11 and over responded to “If I Met Gandhi Today.” The top three winners of each category will be publicly awarded at the 1000 Lights For Peace celebration.

The MC of this year, Shreya Chawla, started off the program with a prayer and words of encouragement to the participants. As a part of Arya Samaj, she represented both the Mahatma Gandhi Library and the Arya Samaj of Greater Houston. After reminding the competitors of the guidelines, she set the contest off to a great beginning, which only got better.

The fascinating speeches of the youth included humorous, relatable anecdotes and quotes from honorable leaders of the world. The younger children rotated their speeches around their local areas, such as school, or at home. The older children brought in more controversial topics of the world, ranging from gun violence to women’s rights. The incredible speeches of all age groups entailed the knowledge and awareness, accumulated after the research of these topics and that which already resides in the ever-growing minds of the future generations.

For the finale, Mr. Atul Kothari, the founder of Mahatma Gandhi Library praised the kids and parents for their effort and dedication. He thanked Mr. Sanjay Jain from the Arya Samaj Of Greater Houston, the distinguished judges, and the volunteers for their aid and service towards spreading Gandhian values. Mr. Kothari then invited all to the grand finale ‘1000 Lights for Peace’ – a beautiful, international cultural program organized as part of Gandhi Jayanti week, from 5:00pm onwards on Sunday, October 14th at the Miller Outdoor Theater in Hermann Park Houston.

All in attendance were then asked to participate in Poster Contest for Mahatma Gandhi Week 2018 organized by Mrs. Rita Kothari at the same venue. 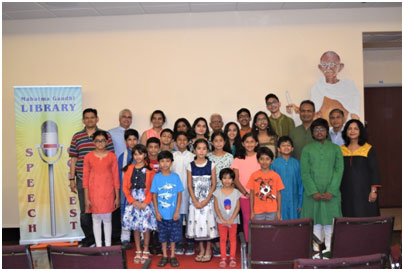