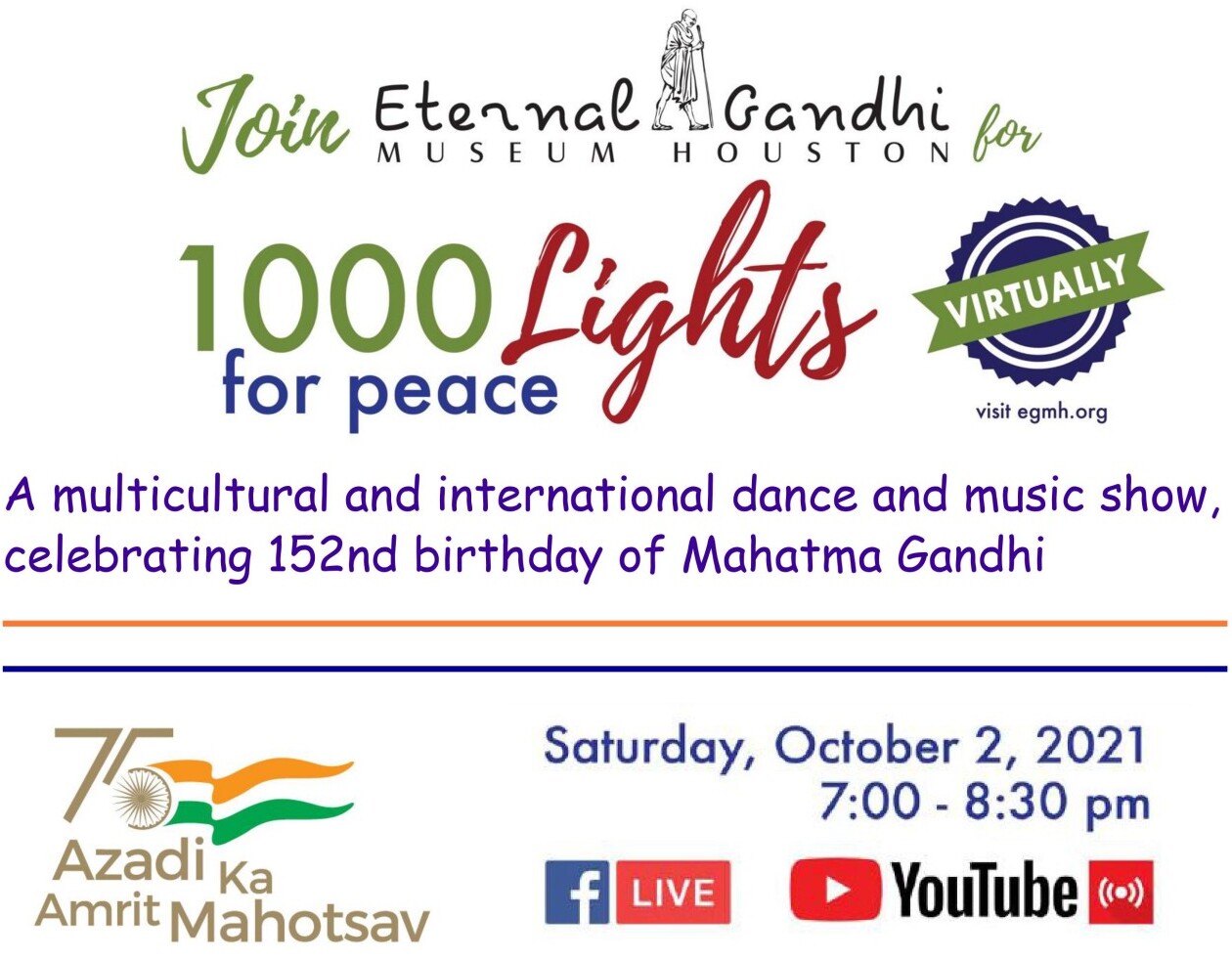 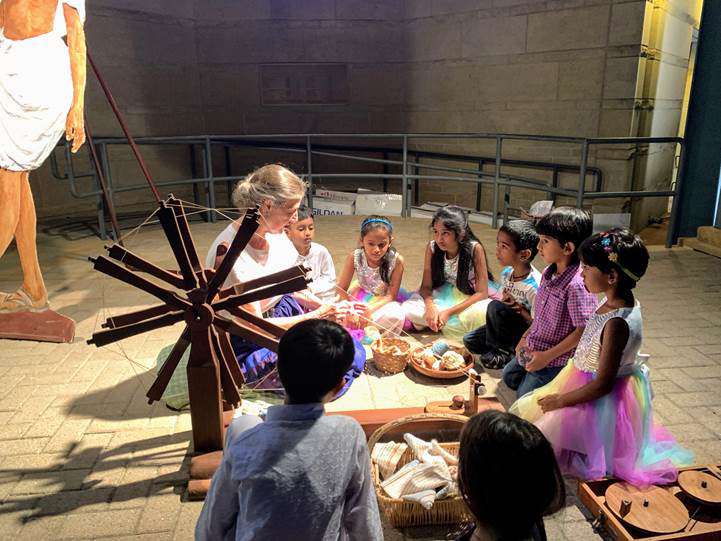 Celebration of Mahatma Gandhi’s Sesquicentennial as 1000 Lights for Peace and Walk for Peace on Sunday, October 6, 2019 at the Miller Outdoor Theatre marked the conclusion of yearlong celebrations in Houston. It all began with grand opening of celebrations at Asia Society on September 30, 2018.

The gorgeous day started with 5K Walk for Peace through beautiful Hermann Park led by Harris County Commissioner of Precinct 1, Rodney Ellis, as the Grand Marshal. The walk began from the Miller outdoor Theatre with a thunderous send-off by the talented Katy Stockdick Junior High School band directed by George Liverman and Dholi Mr. Chidanand Singh.

Krishna Vavilala and Ram Ramanathan dressed as Mahatma Gandhi lifted the spirits of the walkers. They paid their respects to Mahatma Gandhi with garlanding his statue in the Hermann Park. 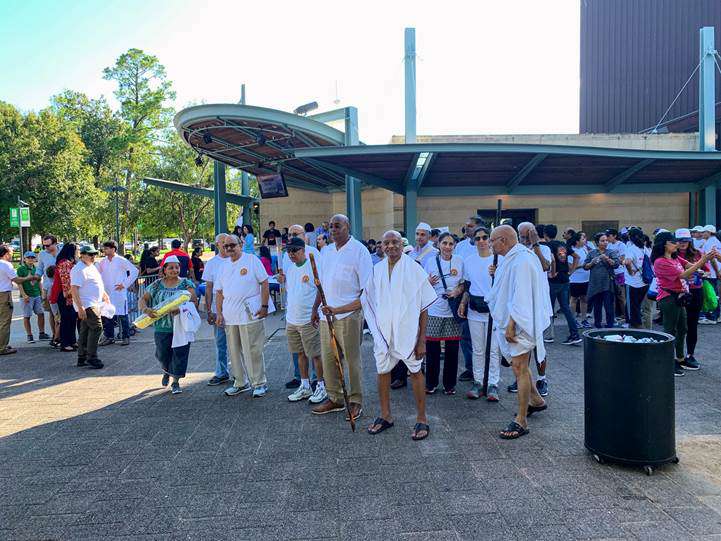 The 1000 lights for Peace program started at 6 pm with a moment of silence in honor of fallen Deputy Sandeep Dhaliwal.

Connie Elliott of Contemporary Handweavers of Houston then gave a live, on-stage demonstration of the Charkha, a symbol of self-reliance, perseverance and determination as a fitting tribute to Mahatma Gandhi on his 150th birthday. As the Charkha demonstration was going on a multi faith invocation took place that was coordinated by Rev Gregory Han and carried out by Dr. Sushma Mahajan, Dr, Alejandro Chaoul, Dr. Melanie Mouzoon, and Dr. Kashan Ishaq.

The Gandhi Darshan Exhibit portraying the chronologic lifetime of Gandhiji with actual photographs from that era was also on display as were booths for arts and crafts and henna painting, which the children line up for. The Vegan Society for Peace and Unity Houston also had tables with information about their respected organization.

The invocation was followed by a calm, mind-soothing meditation from GROW Unity by Mystic Taout Thanet. Swar Sangam, led by the talented Smriti Srivasatva, sang a medley of two songs, Maithreem Bhajata (Sanskrit for cultivate friendship and humility, which conquers the heart of everyone) and Vande Matram.

Ayushi Kawedia and Nathan Ndisang, winners of the age 10 and under group speech contest, inspired the crowd by reciting their winning speech “My Dream of World Peace.”

Next was a colorful performance by Ambassadors International Ballet Folklorico titled La Iguana and Salida Veracruz, dances from Mexico.

Anusha Sathya, a senior from Seven Lakes High School KISD treated the crowd to her brilliant winning speech in the 11 and over age group describing “Eternal Gandhi Museum: what I’d like to see.”

The D.A.V. Montessori and D.A.V.Elementary students from Arya Samaj of Greater Houston presented a spectacular dance: Peace and Harmony.

Mayor Turner then presented awards to more than 30 student winners of the city-wide contests held by Mahatma Gandhi Library. 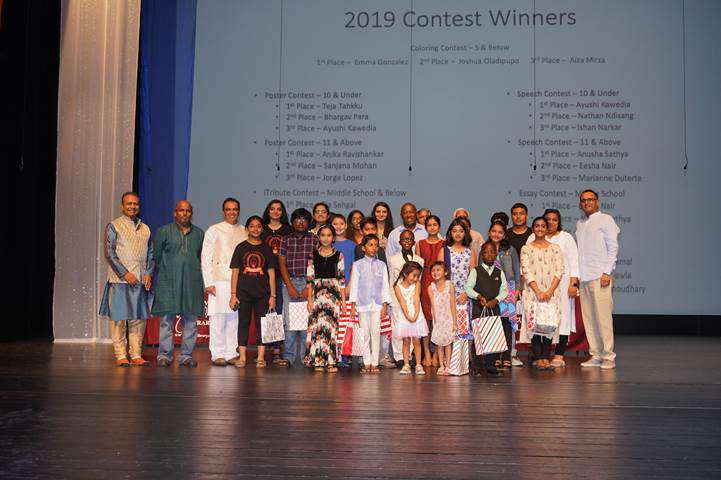 Paraluman dazzled the crowd with an authentic Filipino dance with colorful costumes and candle lights.

Dr. Wani then made the presentation on Eternal Gandhi Museum Houston slated to open in summer of 2021. A video was shown of Prime Minister of Bharat, India, Shri Narendra Modi unveiling the plaque of groundbreaking for the museum during his visit to Houston for Howdy Modi event in September, 2019.

Dance of Asian America dazzled the audience with 2 Chinese dances titles “Seeking Songbirds” and “Petals of Poetry.” This was followed by Kouman Ke’le’ African Dance and Drum Ensemble who gave a dynamic and energetic performance.

Unity Choir, directed by Dr. David York, shared three songs with the audience starting with “I am determined.”

Honorable Consul General of India, Dr. Anupam Ray, addressed the audience with a humble request to keep the legacy of Mahatma Gandhi alive and gave his hearty congratulations for all the relevant activities of the Indo-American diaspora in Houston.

The Keynote Speaker for the evening Dr. Stephen Klineberg, Professor Emeritus of Sociology at Rice University, gave an informative message about the diversity of Houston and ongoing trends in the Houston metropolitan area.

The students of Anjali Center of Performing Arts, directed by Dr. Rathna Kumar, performed a classical Indian dance to a melodious tune and presented Salt Satyagraha, through dance and mime.

The spectacular evening concluded with the lighting of a candle by all as a symbolic pledge to observe peace in their own lives. The crowd reflected on how to emulate Mahatma Gandhi’s life listening to the soothing song “Imagine” by John Lennon and the soundtrack of “Jyot se Jyot.” 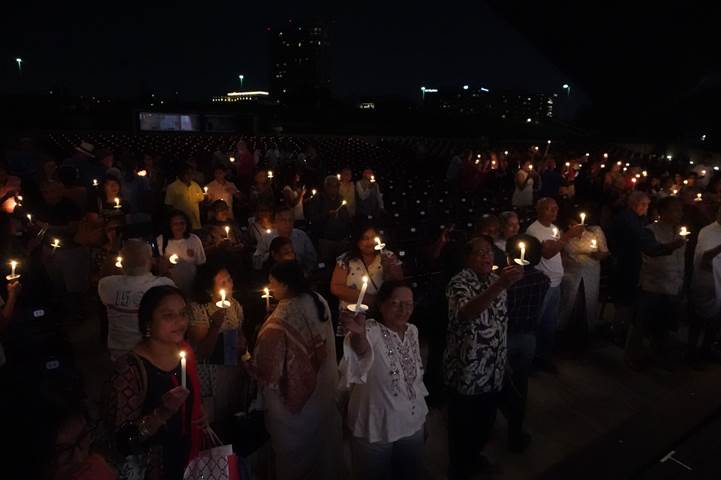 To learn more about Eternal Gandhi Museum Houston and all its activities, please visit egmh.org or contact Dr. Manish Wani at 713-829-6979.

The spirit of Houstonians attending the program was truly visible during this auspicious celebration. The gorgeous day started with 5K Walk for Peace, coordinated by Mr. Sesh Bala. The participants walked around Hermann Park voting for peace with their feet, many proudly displaying signs depicting peace. They visited the life size statue of Mahatma Gandhi at the Houston Garden Center to pay homage to the apostle of peace. The Grand Marshalls were Kristen Lee Ohanyan, of Vegan Society for PEACE, Bob Fleming of Compassionate Houston and Ramesh Shah of Ekal Vidyalaya. The walk was led by Vinod Arora dressed as Mahatma Gandhi for the first time.

The finale of the evening celebrating Mahatma Gandhi’s 148th birthday as 1000 Lights For Peace at the Miller Outdoor Theatre was candle lighting by all present as pledge to practice peace in their own lives. It was initiated by Honorable Consul General of Bharat, India, Dr, Anupam Ray.

The 1000 lights for Peace program started at 6pm with an invocation by Dr. Kavita Vachaknavee of Arya Samaj of Houston with Vedic prayer. This was followed by Rev Siedo Francavilla of the St. Nichiren Temple with the chanting of Nam Myoho Renge Kyo, translated Devotion-Mystic-Law-Cause & Effect-Sound.

Neha Srivastava and Akash Gupta, the MCs, kept the evening flowing with historical perspectives on not only Mahatma Gandhi, but also social reformers including Cesar Chavez, Nelson Mandela, Malala Yousafzai, and Desmond Tutu.

The Gandhi Darshan Exhibit portraying the chronologically lifetime of Gandhiji with actual photographs from that era was also on display as were booths for arts and crafts, balloons, and henna painting, which the children lined up for. Annesa Patel, a 10th grader, had a display of her paintings for silent auction. The Vegan Society for Peace and the Indo-American Senior citizens club were active participants throughout the day. Youth volunteer from Arya Samaj led by Sanjay Ahuja helped out from start to finish. Kudos to all the adult volunteers, too many to name, make this yet another great celebration.

The evening started with a melodious rendition of Ganesh Vandana by choir directed by Smriti Srivastava.

The finale of the evening celebrating 148th birthday of Mahatma Gandhi was candle lighting by all present as a pledge to practice peace in their own lives.

Khushi Kawedia, winner of the younger speech contest, inspired the crowd by reciting her winning speech “Love never claims, it ever gives.”

Next was a fabulous performance by the adorable children from Houston’s St. Catherine Montessori Catholic Choir directed by Tim and Mindy Snow. They brilliantly sang “Kumbaya.”

Next was a high-energy, dynamic performance by the Folklorico International from Mexico, directed by Nelly Fraga.

Tony Jha then treated the crowd to his brilliant winning speech in the older category discussing Peace is the goal, non-violence is the way.

The Honorable Consul General of Bharat, India Dr. Anupam Ray addressed the audience on his idea of peace and non-violence and his inspiration from the Father of modern India, Mahatma Gandhi. The Keynote Speaker for the evening Rev Michael Gott, Senior pastor of Unity Houston, spoke about how relevant the practice of Non-Violence was in today’s strife ridden world and that Gandhi’s message of “Be the change you want to see in the world” as his primary influence for entering public service. He said he was Christian with a Hindu soul.

Honorable Consul General of Bharat, India, Dr. Anupam Ray and Rev Michael Gott presented the awards to the many winners of the city-wide contests held by Mahatma Gandhi Library. Please see the picture.

Dr. Manish Wani, member of the Board of trustees of Mahatma Gandhi Library, announced an unprecedented collaboration of MGL with Birla group in India to bring Eternal Gandhi Museum to Houston. It is one the world’s first digital multimedia museums preserving the historical events of Gandhiji’s life. A 3-acre parcel of land has been secured for the museum in South Houston near Beltway 8 and Hwy 59.

The last international performance of the evening was a dynamic performance called Nsati by the KoumonKe’le’ African Dance & Drum Ensemble, directed by Ms. Christina Gerard.

The spectacular evening concluded with the lighting of a candle by all as a symbolic pledge to observe peace in their own lives. The crowd reflected on how to emulate Mahatma Gandhi’s life listening to the soothing song “Imagine” by John Lennon. Please see the picture.