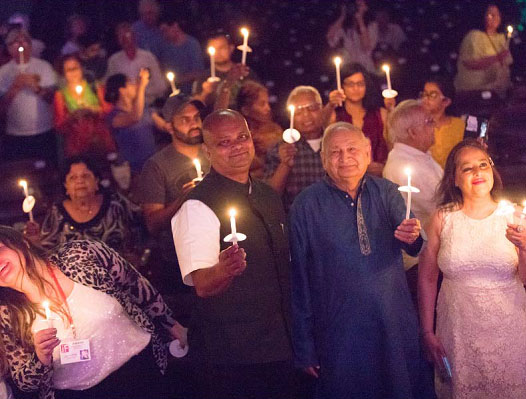 Honorable Consul General of India in Houston, Dr. Anupam Ray along with Devinder Mahajan of Arya Samaj Greater Houston and others participating in candle lighting at 149th birthday of Mahatma Gandhi celebrated as 1000 Lights for Peace at the Miller Outdoor Theatre.

Let the lighting of lamps for peace be not an empty gesture, but light the lamp in your heart with courage and oil of love, said Dr. Sita Kapadia, a Gandhian, at the “1000 lights for peace” event celebrating Gandhi Jayanthi at Miller Outdoor Theater in Hermann Park, Houston on Sunday.

Dr. Kapadia, emeritus professor at the City University of New York, who had met Mahatma Gandhi when she was 9 years old, was speaking at the concluding ceremony of the Gandhi Week, hosted annually by Mahatma Gandhi Library, Houston.

Gandhi knew that there won’t be peace in the world all the time and proposed a solution, namely start it with children. That is what Mahatma Gandhi Library has been doing as the children who participated in Gandhi speech contest demonstrated earlier, Kapadia said.

“These children do make us proud; they give us hope,” she said and urged the community to help Mahatma Gandhi Library in its movement of lighting the lamps of peace.

The spirit of Houstonians attending the program was truly visible during this auspicious celebration. The gorgeous day started with 3K Walk for Peace, coordinated by Mr. Prem Cholia. The participants walked around Hermann Park voting for peace with their feet, many proudly displaying signs depicting peace. They visited the life size statue of Mahatma Gandhi at the Houston Garden Center to pay homage to the apostle of peace by garlanding. Two Gandhis were sighted, one was Vinod Arora and the other was Suresh Shah. The had dressed up as Gandhi ji and led the Walk For Peace.

The 1000 lights for Peace program started at 6pm with an invocation by Dr. Kashan Ishaq recited from Quran, Dr. Sushma Mahajan of Arya Samaj of Houston with a Sanskrit shloka. This was followed by Rev Mindy Lawrence of Unity Houston from The Bible and Dr. Hansa Raval from Brahma Kumaris of Houston spoke about need to keep the flame alive.

Neeraj Salhotra was the MC and kept the evening flowing with historical perspectives on not only Mahatma Gandhi, but also social reformers including Cesar Chavez, Nelson Mandela, Malala Yousafzai, and Desmond Tutu.

The Gandhi Darshan (Glimpses of Gandhi) Exhibition from National Gandhi Museum commemorating Mahatma Gandhi Sesquicentennial portraying the chronological lifetime of Gandhiji with actual photographs from that era was on display for the visitors. There were booths for arts and crafts and henna painting, which the children lined up for. The Vegan Society for Peace also had a table and was active participant throughout the day.

The evening started with a beautiful butterflies dance by the group Dance of Asian America, directed by Ms Janie Yao. Next was a high-energy, dynamic performance by the Ambassadors International Ballet Folklorico from Mexico, directed by Nelly Fraga.

Khushi Kawedia, winner of the younger speech contest, inspired the crowd by reciting her winning speech “Honesty is the best policy.” Next was a fabulous performance by the adorable children from Arya Samaj, directed by Smriti Srivastava, reciting a melodious rendition of one of Gandhiji’s favorite hymn, Vaishnavo Janato. Anusha Sathya then treated the crowd to her brilliant winning speech in the older category discussing “If I met Gandhi today.” Students of the group Swar Sangam, directed by Smriti Srivastava, performed Vande Matram.

The Mahatma Gandhi Library of Houston is planning to build a new world-class cultural destination, the Eternal Gandhi Museum, in southwest Houston and has launched a capital campaign. Dr. Manish Wani, a trustee of the Mahatma Gandhi Library, made a presentation on the proposed Eternal Gandhi Museum. The land has been acquired and architectural design is in progress. Of the $8.5 million required, $2 million has been raised so far. For more information, visit www.eternalgandhi.us.

Dr. Wani said Mahatma Gandhi Library, under the leadership of its founder Atul Kothari, has kicked off the year-long celebrations marking the 150th birth anniversary of Mahatma Gandhi. Visit www.gandhi150.us for more information.

U.S. Rep. Al Green (D-Tx Dist.9) in his remarks said Mahatma Gandhi was the torchbearer before Nelson Mandela in South Africa and Martin Luther King in the USA. Gandhi gave the world the paradigm of peace without force and today the world needs a Mahatma Gandhi, Green said. 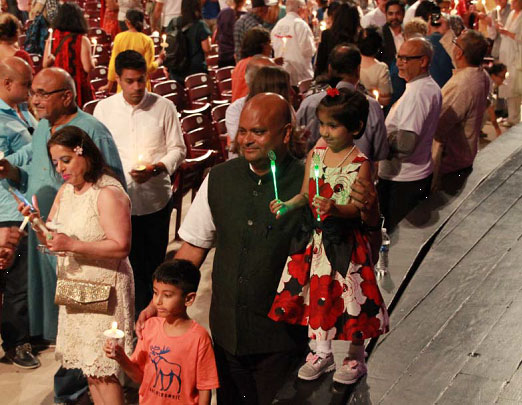 Dr Anupam Ray encouraging and posing with the children at the 1000 Lights for Peace.

India’s consul-general in Houston, Dr. Anupam Ray, in his address pointed out that Gandhi was a luminous character and he lives amongst us today, as evidenced by the large gathering at the event.

Gandhi’s vision helped India achieve its growth after independence, Ray said. He won over the world with his message of love and peace, rather than saying he defeated the mighty British Empire with non-violence.

“He opened up our minds to see the good in everyone. Seeing Truth is the objective of our existence,” Ray said.

Dr. Ray and Mr. Atul Kothari presented the awards to the many winners of the city-wide contests held by Mahatma Gandhi Library.

The last international performance of the evening was a dynamic performance called “Skirt Flirt and Tropical Rain” by Dance of Asian America, directed by Janie Yao.

The spectacular evening concluded with the lighting of a candle by all as a symbolic pledge to observe peace in their own lives. The crowd reflected on how to emulate Mahatma Gandhi’s life listening to the soothing song “Imagine” by John Lennon. 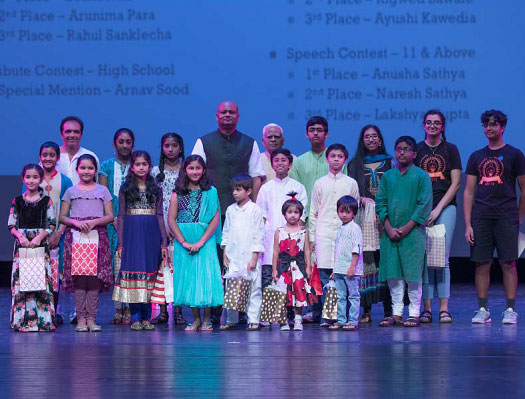